From Dirt Track to Speedway

Motorcycle dirt track racing had its origins in both South Africa and the USA, during the early 1920’s. Of the various machines used, the horizontal twin-cylinder Douglas, with its low centre of gravity, proved particularly suitable. The Douglas factory was quick to capitalise on this new sporting phenomena and developed the DT5 and then DT6 machines for dirt track racing and other off-road sporting disciplines.

The first dirt track race in Britain under ACU rules took place at High Beech, Epping Forest in February 1928. While local competitors rode conventionally using both footrests, Australian and American riders introduced their exciting ‘broadsiding’ riding style. Hundreds of people were expected but thousands turned up to witness the well-publicised event. The meeting lasted until sunset and it was Alf Metcalf riding a Douglas who won the first race of the day to establish Douglas as the machine to have. The success of this event rapidly led to cinder-racing tracks being constructed around Britain, usually at greyhound tracks or football grounds. 1929 was the best sales year for Douglas DT models and the famous American rider, ‘Sprouts’ Elder was employed by Douglas with a stable of 10 machines and a dedicated mechanic. 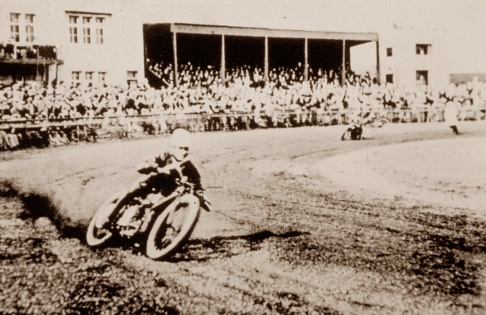 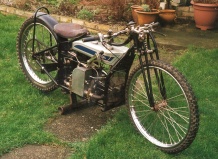 Douglas’ success in speedway had not passed unnoticed, however, and other manufacturers were also developing speedway machines. From 1930, the Coventry firm of Rudge began to challenge Douglas’ pre-eminence and later, Rudge’s domination of speedway would give place to J A Prestwich (JAP), the London manufacturer whose engines were built into a variety of specialised lightweight frames. Their dominance of the sport would last for decades; after World War II, speedway was the most popular spectator sport in the country.

Douglas, Rudge and JAP machines from the ‘golden age’ of speedway are still occasionally seen in vintage events today and Douglas DT5s are still ridden in earnest at grasstrack events and hill climbs around the country.