Douglas emerged from the 1914-18 war years in a strong position. As one of two suppliers to the British Army – the other was Triumph – their machines were proven and trusted, and their manufacturing facilities were geared for volume production. Many machines were exported to Australia and New Zealand, where they were a popular choice among returned servicemen. 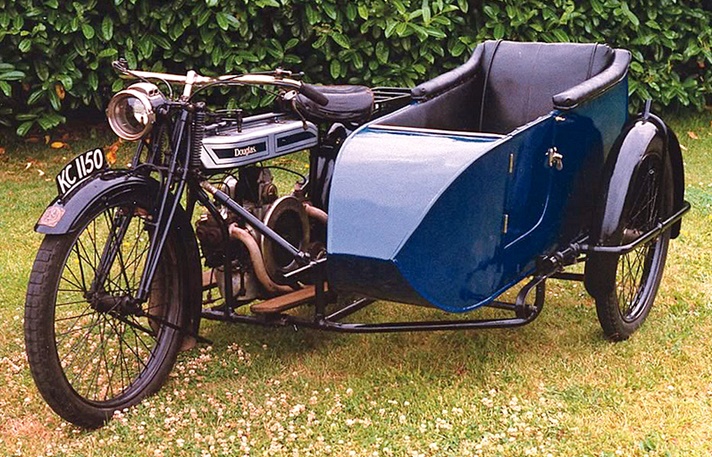 1920 – Model BM  Travelling in style – a 1920 Model BM with 4hp (596cc) engine and original Douglas sidecar. Stopping this outfit still relied on a bicycle-style stirrup brake at the front and a block brake at the rear. 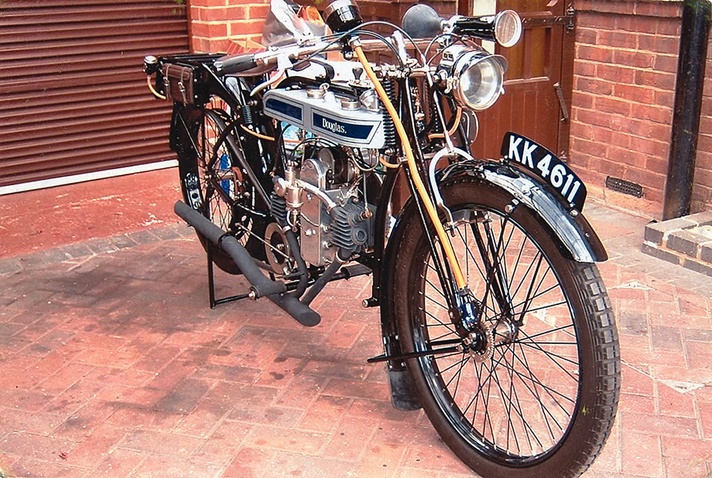 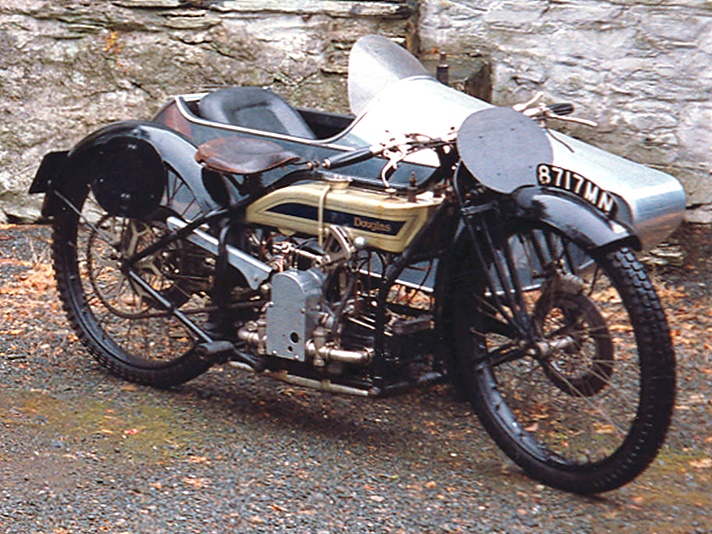 1923 – Model RA  Introduced late in 1923, the overhead-valve 494cc RA was aimed at the competition rider. Advanced features included alloy slipper pistons, a flywheel clutch, twin carburettors and all-chain drive, but most innovative were the cable-operated disc brakes with aluminium calipers at the front and rear. They were dropped after two years.

1924 – Model OB  For fast touring or sidecar use, the 1924 Model OB was a 596cc overhead-valve machine with all-chain drive but traditional block brakes. Note that the hand/foot starter engages the engine directly, rather than through the high-mounted gearbox. Douglas’ 1924 catalogue describes their overhead-valve engine as ‘the finest piece of craftsmanship ever set between two wheels’! 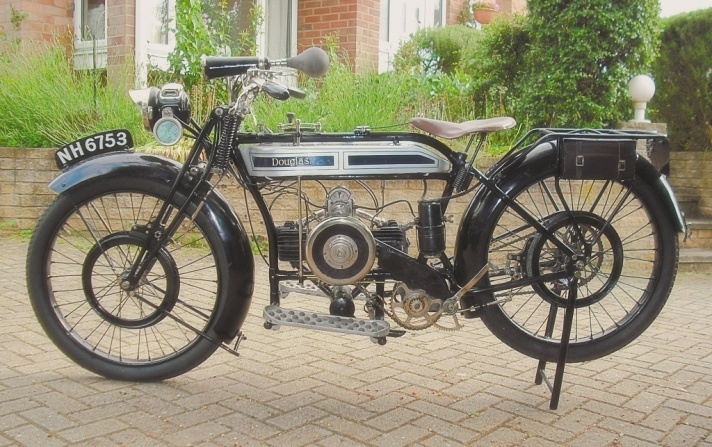 1925 – Model CW  Introduced in late 1923 for the 1924 season, the CW 2.3/4hp, with three-speed gearbox and Douglas’ flywheel clutch, was the first large-scale production model from the Kingswood factory to feature all-chain drive. The beautifully restored 1925 example above is fitted with the standard under-slung exhaust while the high-spec model below also dates from 1925 and includes a speedometer and a truly impressive pillion sprung saddle! Clearly visible in the lower picture are the oil sight-glass and hand-operated plunger pump in the tank top. 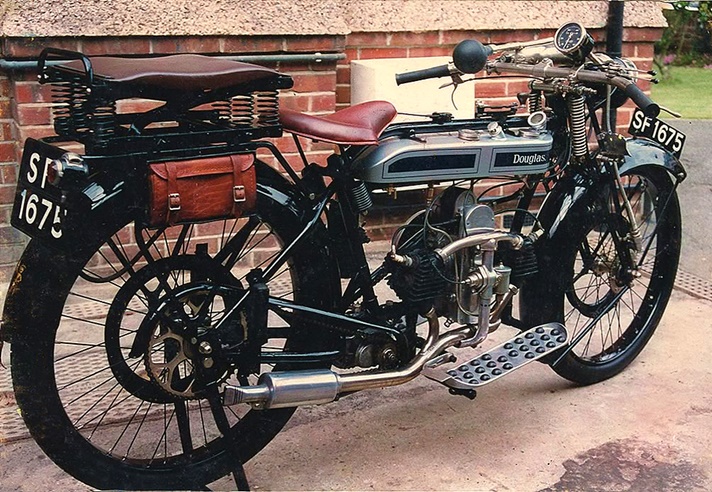 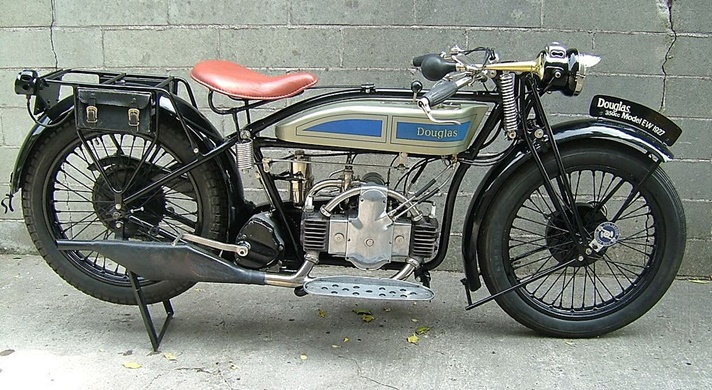 1927 – Model EW  Stylish and competitively priced, the EW 2.3/4hp was the mainstay of Douglas’ sales during 1926-7, and over 200 examples are still known to exist. Engine, gearbox and frame were all new, as was Douglas’ own ‘servo action’ internally-expanding band brake. The centrally-positioned gear change lever operates through a slot in the petrol tank. This example is fitted with an acetylene lighting set and a bulb horn, which together cost an extra 30 shillings (£1.50). 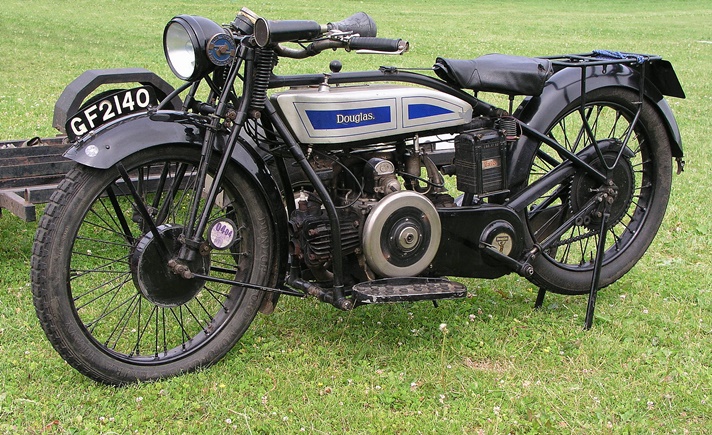 1927 – Model SB  Sometimes referred to as the ‘600 EW’, the Model SB was a development of the 348cc EW, with a similar layout but heavier construction as shown by the twin downtube frame. This 1927 model has electric lighting, powered by the new BTH ‘car type’ dynamo mounted on the offside of the engine, which added an extra £6-5-0 (£6.25) to the £58 purchase price. 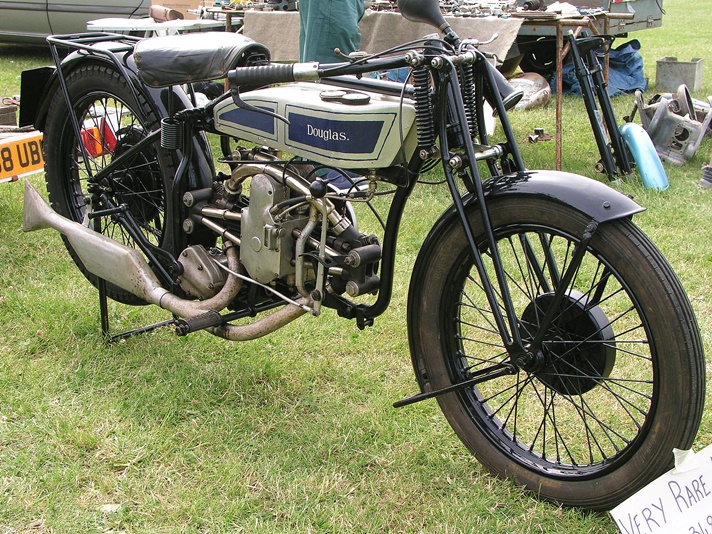 1928 – Model D28 Sports  Douglas had positioned their gearboxes above or behind the engine on earlier models but, for the overhead-valve 348cc Model D of 1928, the engine was mounted higher in the frame with the gearbox below the rear cylinder. This D28 Sports, with turned-down handlebars and low-mounted gearchange, is a rare machine, as the Model D was discontinued in 1929. 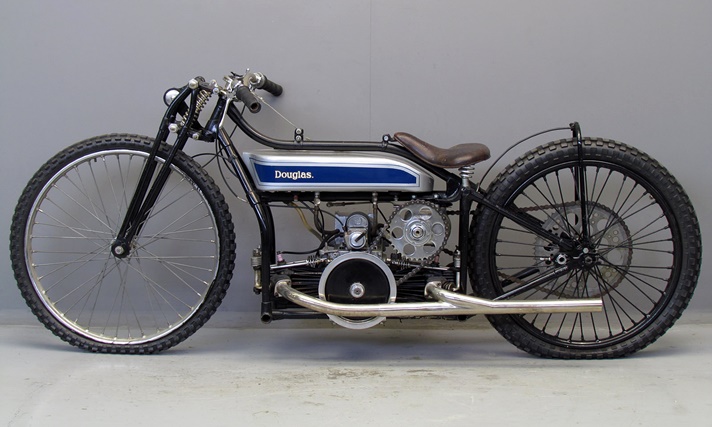 1928 – DT5  The iconic ‘Dirt Track’ Douglas. Introduced as a 500 in 1928 and joined by a 600cc version in 1929, the DT5 and DT6 machines, with their RA-based overhead-valve engines and low centre of gravity, dominated the new sport of speedway in 1929 and 1930. Note the friction dampers for the steering and forks, and the lack of a nearside footrest. The sturdy-looking rear mudguard stay doubles as a ‘pushing-off bar’ for starting.